Many thanks to Barry Jackson for sharing his insights on sanitation subsidies – Dan Campbell, USAID Water CKM

Barry M Jackson commented on The ‘S word:’ Is it time for the sanitation sector to reconsider subsidies?

The ‘S word:’ Is it time for the sanitation sector to reconsider subsidies? Devex, September 2017. STOCKHOLM — After nearly …

Thank you Sophie for capturing key points of the recent “S-Word” debate. I was one of the pioneers of the no-subsidy approach in Lesotho in the early 1980s, well aware that we might still need to modify the approach for the ultra-poor and urbanizing areas. The Global Sanitation Fund also promoted no-subsidy in rural programmes in most client countries except India where a symbiotic approach with the government subsidy programme is being tried. The WSSCC produced a useful primer and resource on subsidy issues that was launched in Stockholm in 2009 (Public Funding for Sanitation – The many faces of sanitation subsidies; http://wsscc.org/resources-feed/public-funding-sanitation/). I have penned a few thoughts below.

In rural areas we should concentrate our funding on promotion of behaviour changes – both short and long term. If quality of toilet or extreme poverty are issues we could consider household support and incentives in the form of an appropriate “reward” for building a toilet, e.g. an inexpensive washable fly-proof cover for the floor – on condition that such an approach is not donor dependent and will be financially sustainable for a generation.

In urban areas sanitation practitioners must engage with those responsible for financing, building and operating municipal infrastructure. The aim is to have a municipal-wide strategy that manages the ever-changing boundary between sewered and non-sewered services and which provides a sustainable service on both sides of that boundary. Decisions on levels of service, together with financial and material support to households need to be made equitably. User fees should reflect O&M costs and paying for capital costs (especially for the “rich”), modified as necessary by individual subsidies (for the poor), cross-subsidies etc – on condition that the total municipal income is sufficient to meet total costs of the service, to ensure sustainable service delivery.

At a national level (or in a sub-national region) the above approaches need to be supported by a coordinated effort to update municipal by-laws and their enforcement, to improve municipal planning and finance, plus sustained promotion of a hygienic lifestyle. Communal behaviour change targeted at sanitation and hygiene needs to be promoted through consistent messages from politicians, religious leaders, celebrities, soccer stars, health workers etc, both locally and using mass media. We must plan to continue this for a generation until our children expect to find and use, everywhere, a hygienic toilet and a means of washing hands with soap. Let us plan for a generation.

India, Bihar: if you want to be elected, get a toilet first

First we had “no toilet, no bride“, now you need a toilet to be elected in India. At least that’s  what chief minister Nitish Kumar is proposing for his state Bihar. He made the announcement on World Toilet Day, 19 November.

Candidates who don’t have a toilet in their home will not be allowed to contest rural (panchayat) and urban local body elections in the state.  The chief minister said he would ensure that relevant legislation (Bihar Panchayati Raj Act) would be amended to make this possible.

END_OF_DOCUMENT_TOKEN_TO_BE_REPLACED

Every year, diarrhoea kills more children in developing countries than AIDS, malaria and measles combined (Pruss-Ustun 2008). Sanitation subsidies are a common tool used to motivate households to construct toilets. This seems an obvious response: many who lack access to sanitation are extremely poor and the potential public health benefits of universal access to safe sanitation are immense. But what is a subsidy? All programmes have some form of subsidy – so the question is HOW to use them effectively.

On the 11th of September, IRC debated the pros and cons of sanitation subsidies. The debate started with short presentations for and against sanitation subsidies. After that, discussions shifted towards a common definition of a subsidy and improvements to ensure subsidies contribute to sustainable services.

END_OF_DOCUMENT_TOKEN_TO_BE_REPLACED

Why do families build toilets? If the family tradition for many generations has been to defecate in the open – using local woods or accepted sites, then what is the incentive to make a break and opt for a toilet instead?

Concern for daughters and for elderly relatives are two factors often mentioned by families as motivating factors, especially as ‘safe’ places to defecate outside disappear.

END_OF_DOCUMENT_TOKEN_TO_BE_REPLACED

The government’s subsidy policy for sanitation needs to be more effective and more money should be allocated if Bangladesh is to meet is target of sanitation for all’ by 2013, experts say.

This is the conclusion of a study conducted among 21,121 households by the Human Development Research Centre (HDRC) with the support of WaterAid, UNICEF, and the Ministry of Local Government Division.

Economist Abul Barakat, who led the research team, said a Union Parishad, the lowest tier of the local government, receives Tk 145,000 [US$ 1,910] while a Pourashabha or municipality gets Tk 292,000 [US$ 3,840] a year in sanitation subsidy. “But the allocation is not properly utilised.”

END_OF_DOCUMENT_TOKEN_TO_BE_REPLACED

The new bill includes provisions to provide subsidies and grants to those who cannot afford a connection, as well as fines for those who fail to comply with the new law.

In the capital Montevideo, the local government will administer the new law, while state water utility OSE will be responsible for the rest of the country.

While improved rural sanitation coverage was estimated to be 99% in 2008 (WHO/UNICEF, 2010), some 50,000 households are still not connected to a sewerage network. In some areas only 15% of households have sewerage connections.

Briefing Note on Mapping EU Support for Sanitation in Africa 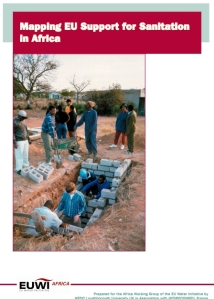 The Briefing Note “Mapping EU Support for Sanitation in Africa”, published by the EU Water Initiative (EUWI) Africa Working Group, is based on a full study by WEDC in association with Hydroconseil. The purpose of the study is to obtain an overview of the status of the involvement of EU Member States and the European Commission in sanitation-related activities in Africa. It is anticipated that the findings of this work will have the potential to be used for both arguing for greater priority for sanitation within the international architecture and also for individual donors to use in discussing their own Official Development Assistance (ODA).

END_OF_DOCUMENT_TOKEN_TO_BE_REPLACED

Community-led Total Sanitation (CLTS) is not always a success. The IPS article below tells about a peri-urban community in Sierra Leone where a CLTS programme failed because the community had wrongly assumed that it would receive a subsidy to build improved latrines.

Freetown. Lying forgotten in the bush somewhere is a sign declaring “Ogoo Farm is an open defecation-free community.”

This peri-urban community of roughly 3000 people was one of the villages where UNICEF and the Sierra Leone ministry of health implemented the pilot phase of a Community-Led Total Sanitation Programme in 2008.

The programme trains communities on the dangers of open defecation – which contaminates streams and other water sources – and mobilises action to end the practice.

]…] But the gear pushing the programme forward in Ogoo Farm, 40 kilometres from the Sierra Leone’s capital, Freetown, appears to have become stuck in reverse. The majority of community residents still head for a quiet spot in the bush to empty their bowels.

“The project is simply not working properly,” Bai Kabia, the Ogoo Farm headman told IPS. He explained that initially the villagers were all thrilled with the idea of keeping their village hygienic.

“The sensitisation was dramatic. We realised that the idea of using the bush and streams in our village as toilet was bad and detrimental to the health of the whole village and we agreed to start building toilets,” Kabia explained.

He said that they dug 70 pit latrines around the village, each with a screen made of tarpaulin or nylon rice bags to shield a user from view.

The toilets were not an unqualified success. Ogoo farm’s women were among the first to abandon using them.

“These makeshift toilets are not very private,” Ramatu Kamara complained. “The heat that comes up these holes are unbearable when we stoop to use them. Moreover some of us have had infections using these toilets.”

There was worse to come. “When the rains came, the tarpaulin covering was destroyed. We also discovered that the pits were unsafe as the dirt around it was collapsing because we did not use iron rods to build the pit, we used sticks and these rot during the rain,” Kabia said.

“The holes even flooded and brought up everything we had sent down in them.”

Kabia said that they invited UNICEF and the health ministry to a meeting and told them about the problems.

“We suggested that they help us build proper toilets. We have offered to make mud blocks and we want them to give us corrugated iron sheets to (make a) roof. They promised that they would source funding for that but up till now nothing has been done.”

But Thomas Amara, the acting manager of environmental health in the ministry of health and sanitation told IPS that this is not how the sanitation programme works.

Arnold Cole, UNICEF’s water and sanitation health specialist for Sierra Leone, confirmed that the programme does not provide any subsidy whatsoever to communities.

“We encourage self empowerment.” Cole said. UNICEF is providing finance and technical support to more than 30 NGOs and six districts authorities to take the programme of awareness and mobilisation all over the country.

Cole claimed that Ogoo Farm was an exception in a programme that is succeeding in other parts of the country; alongside the health ministry, they have identified enthusiastic locals they refer to as “natural leaders” who then go into other villages and towns and spread the message.

The health ministry’s Amara said that in some rural villages in Port Loko, Kenema and Moyamba, the programme has been embraced so fervently that by-laws against open defecation have been passed, with heavy fines for defaulters.

“They also have been ‘scaling up’, building better and permanent toilets with their own monies,” said Amara.

One difference, he noted, is that villagers in the provinces usually own the houses they live in. They are more ready to bear the cost of building improvements like toilets than those in communities close to urban areas, such as Ogoo Farm, where most residents are tenants who look to their landlords to build permanent toilets.

Ogoo Farm headman Bai Kabia agreed, “They do not want to take responsibility for anything and as soon as they found out the project is being facilitated by NGOs – especially big organisations like UNICEF – they thought that there should be money for everything.”

And so it was that the “open defecation-free” sign was uprooted just two months after it was planted. “We do not want to live a lie, (open defecation) is still here,” the village headman sighed.

However Kabia revealed that the Farmers’ Association in their community has promised to build proper public toilets in different locations in the Community as part of their social responsibility.

The headman said he is also encouraging the community people, tenants as well as landlords to build toilets for their houses and that new house constructions will not be approved if the plan does not include toilet construction.

Public Funding for Sanitation: The Many Faces of Sanitation Subsidies

At the Water Week in August, WSSCC will release its new report, “Public Funding for Sanitation: The Many Faces of Sanitation Subsidies” (working title). The report will clarify the often-contentious global debate on subsidies and sanitation financing, and it provides guidance on how to select the most appropriate funding arrangements in different situations. To be placed on the list for a review copy, send a mail to troubad@who.int