The 2theloo concept: a clean restroom, a shop with toiletries and a coffee corner

Treurniet got the idea to develop the 2theloo concept when he was out shopping with his wife and children in Bruges (Belgium) and found it very difficult to find a clean toilet.

The 2theloo concept means “always clean” restrooms and washrooms, a shop with toiletries, storage closets, sometimes a coffee corner, a family restroom for parents with children, and a special restroom for the disabled.

END_OF_DOCUMENT_TOKEN_TO_BE_REPLACED 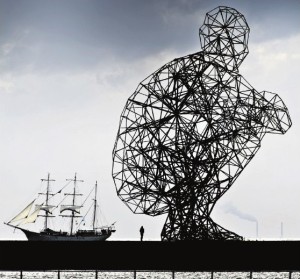 Has a monument to open defecation been erected in The Netherlands? You might think so after Dutch residents christened Antony Gormley’s 26 metre high monumental sculpture “de poepende man” or the “shitting man”.

The real name of the giant crouching man overlooking the Dutch Markermeer lake is “Exposure”. Weighing 26 tonnes and taking six years to build, the sculpture was unveiled on 17 September 2010 in Lelystad, central Netherlands.

As one approaches it, [Gormley] explains: “The nature of the object changes. You can see it as a human form in the distance. It becomes more abstract the closer you get to it. And finally it becomes a chaotic frame through which you can look at the sky.”

The elements meet at particular nodal points – starbursts of metal – the most congested of which are at the head, throat, heart, stomach and genitals of the form. These roughly correspond to the “chakras”, or energy points, of ancient Hindu thought. “It is a re-examination of the body as an energy system, rather than as a system of bone, muscle and skin,” says Gormley.

When asked if he took offence to his sculpture’s nickname, Gormley said:

“I don’t mind that at all. […] Having a crap is one of the most relaxing and intimate moments one has in the world.”

Read more about the sculpture in an article by Charlotte Higgins in the Guardian of 27 August 2010.

The first High Level Meeting of the Sanitation and Water for All global partnership is targeting Ministers of Finance and Ministers of Development Cooperation. They are considered to have the most influence when it comes to securing the investments needed for “Getting on-track for the sanitation and water MDG targets”, the focus for the meeting to be held on 23 April 2010 in Washington, DC, USA.

Sanitation and Water for All is a joint initiative launched by the UK and the Netherlands in September 2008, which now involves 17 other donors, multi-lateral agencies, civil society and other development partners. The initiative allocates £5 million (6 million Euros) over five years to an annual report and high level meeting focused on reviewing progress. A further joint Dutch-UK commitment was made of £85 million (100 million Euros) over the same period to help up to 20 poor countries develop and implement their own national water and sanitation plans.

One of the expected outcomes of the meeting will be a greater understanding of the linkages between water, sanitation and economic growth. To support this outcome, economic case study reports for sanitation and drinking water have been prepared for 19 countries, 14 from Africa and 5 from Asia.

Another expected outcome is the “identification of specific steps countries can take to advance access to, and mobilize resources for, increasing access to safe water and sanitation – particularly countries with greatest needs; including the development of technical assistance tools to provide support for the development and implementation of national water and sanitation plans/strategies”.

More information on the High Level Meeting and on the Sanitation and Water for All initiative’s Global Framework for Action can be found on the web site of UN-Water.

Contrary to what you would expect, open defecation is not only a problem in developing countries. PWN, the provincial water company for North Holland in The Netherlands, has been forced to install barbed wire and electric fencing to stop tourists from using a water catchment area as a public toilet.

Regularly, toilet paper and human excrement are found in the dunes of Castricum. The dunes not only act as a recharge area for drinking water but also attract 7 million visitors a year.  To prevent contamination of the water by pathogenic bacteria and viruses, the catchment area will no longer be accessible to the public who previosuly passed through it en route to the beach.  Public benches will also be removed as PWN fears people may still hide behind them to urinate or defecate.

Although a PWN spokesperson said the local fauna would not be harmed,  a local respresentative for animal welfare and wildlife conservaton would rather have seen eco-toilets intalled instead of barbed wire and electric fencing.

Millions to benefit from UK-Dutch water and sanitation initiative

Millions of people in Africa and Asia will be provided with clean drinking water and decent sanitation thanks to a new joint initiative from the UK and the Netherlands.

Announcing UK support for the “Framework for Action”, DFID Minister Gareth Thomas spoke of the need for greater progress towards the Millennium Development Goals (MDGs) on water and sanitation.
{…]

The initiative, which was launched on 24 September at the United Nations High-level Event on the Millennium Development Goals in New York, will allocate £5 million (6 million Euros) over five years to an annual report and high level meeting focused on reviewing progress. The first of these meetings will be held in 2009 and convened by Unicef.

A further joint Dutch-UK commitment was made of £85 million (100 million Euros) over the same period to help up to 20 poor countries develop and implement their own national water and sanitation plans.

Other committments made during the”One World One Dream: Sanitation and Water for All” event at the UN High Level Meeting include: