Quantifying risks and interventions that have affected the burden of diarrhoea among children younger than 5 years: an analysis of the Global Burden of Disease Study 2017. Lancet Infectious Diseases, October 30, 2019.

Among the risk factors considered in this study, those responsible for the largest declines in the diarrhea mortality rate were reduction in exposure to unsafe sanitation (13·3% decrease, 11·2–15·5), childhood wasting (9·9% decrease, 9·6–10·2), and low use of oral rehydration solution (6·9% decrease, 4·8–8·4).

Diarrhea mortality has declined substantially since 1990, although there are variations by country. Improvements in sociodemographic indicators might explain some of these trends, but changes in exposure to risk factors—particularly unsafe sanitation, childhood growth failure, and low use of oral rehydration solution—appear to be related to the relative and absolute rates of decline in diarrhea mortality.

Although the most effective interventions might vary by country or region, identifying and scaling up the interventions aimed at preventing and protecting against diarrhea that have already reduced diarrhea mortality could further avert many thousands of deaths due to this illness.

Posted in Research, Sanitation and Health

Organizations around the world are coming together behind a common goal of keeping governments accountable to promises made with regards to providing safe water and sanitation to all.

To support them in this work, End Water Poverty is organizing exciting conversations to cover important aspects of water, sanitation, and hygiene. These webinars are open to the public, so please share these widely amongst your networks:

– Thursday March 23rd; 3:30 PM GMT: “How to Finance an End to the Water and Sanitation Crisis”
Register here: http://bit.do/WAM-webinar-Finance

– Tuesday March 28th; 3:30 PM GMT: “How and Why to Involve Children and Youth in WASH Initiatives”
Register here: http://bit.do/WAM-webinar-Youth

Posted in Campaigns and Events, Funding 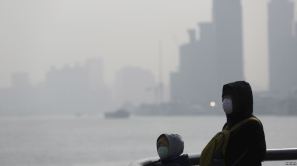 FILE – People wear protective masks near the Bund during a polluted day in Shanghai, China, Jan. 19, 2016.

Environmental pollution kills more than 1 in 4 children under the age of five every year – that’s 1.7 million children worldwide.

The World Health Organization warns these child deaths will increase dramatically if action is not taken to reduce environmental risks.

The authors agree that air pollution is the biggest killer and is responsible for 6.5 million premature deaths every year, including nearly 600,000 deaths among children under age five.

Margaret Chan, WHO director-general, notes that young children are most at risk of dying from a polluted environment because of “their developing organs and immune systems, and smaller bodies and airways.”

While most of these child deaths occur in developing countries, Maria Neira, WHO Director, Department of Public Health, Environmental and Social Determinants of Health told VOA that air pollution was a big leveler between rich and poor countries.

“You can be a very rich child, your parents very rich, but living in a place, in a city, which is very polluted-then there is very little you can do because we all need to breathe.

“So, even if you are rich or poor, you still need to breathe and this is very pernicious. Air pollution is everywhere,” she said.

WHO reports the most common causes of death among children aged one month to five years are diarrhea, malaria and pneumonia.

“These are very much affected by air pollution, water and sanitation, which is inadequate, but also the disease vectors, mosquitos around the house and the community,” said Annette Pruss-Ustun, scientist in WHO’s Public Health and Environmental Department.

Posted in Sanitation and Health, Uncategorized

The WASH sector has, thus far, greatly overlooked the enormous potential of hygienic child stool disposal to considerably reduce the prevalence of diarrhoeal diseases. Young children are concurrently more susceptible to faecal-oral disease transmission and an important source of infection because their faeces contain high levels of pathogens.

Based on a literature review and new research, this policy brief describes the potential impact of unsanitary child stool disposal and presents data on child faeces disposal practices in 38 countries in Sub-Saharan Africa and South Asia.

It also highlights how the prevalence of safe disposal of child faeces differs in households with access to different types of sanitation, across rural and urban settings and with the age of the child. Finally, it offers recommendations for the WASH and health sectors on improving child faeces disposal to reduce the presence of child excreta in the household and community environment.
.

Posted in Publications, Sanitation and Health 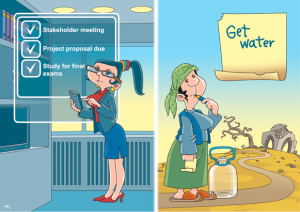 In Nepal, reducing the time it takes to fetch water by just one hour could increase girls’ school enrollment by 30%.

While women’s lives around the world have improved dramatically, gaps remain in many areas, including water and sanitation. For example, a recent study in 44 developing countries found that women carry water more often than men by a ration of nearly 2 to 1. Time is but one cost. There are many. How can we draw more attention to gender issues in water and sanitation ? Perhaps through drawings.

The World Bank/WSP 2012 Calendar combines illustrations,  humor, and data to focus attention on the role of gender in developing countries’ ability to ensure improved water and sanitation services for all citizens.  Gender is also the focus of the World Bank’s 2012 World Development Report on Gender Equality and Development .

Take a look. Images are worth a thousand words– and they can speak on behalf of billions.

Comments and feedback on the calendar are welcome at wsp@worldbank.org.

It estimates a yearly 15 billion-dollar economic cost to the continent if the Millennium Development Goal (MDG) targets for water and sanitation are not met.

In a press release received by GNA on Monday, Mr Stephen Ntow, Country Representative of WaterAid, Ghana, expressed disquiet over the fact that African leaders had failed to act upon a pledge to address the situation at last year’s African Union Summit.

“Last year’s Summit marked a breakthrough as African leaders raised water and sanitation to the top of the political agenda by signing the Sham El-Sheik and eThekwini commitments to accelerate progress towards the water and sanitation goals,” he said, but expressed shock that little action had been done to address the situation.

Mr Ntow said the number of children that died of diarrhoea were a stark indication of the human cost of insufficient investment and called for immediate and pragmatic steps to reverse the sad trend.

“Diarrhoea is a major health crisis facing Africa. It is the second biggest killer of under-fives, yet neither governments nor donors are paying enough attention to this deadly disease,” he said.

Posted in Africa, Sanitation and Health

Dinajpur district residents have stopped defecating in the open because of the children’s total sanitation campaign that follows a radical community-led approach.

A procession of children march through a village in Dinajpur demanding an end to open defecation. Photo: Pal Bangladesh

Whistle blowing is a favorite pastime among children in the villages of Dinajpur district in northern Bangladesh. They would blow their whistles when they spot fellow villagers, often adults, defecating in the open, chasing the surprised offenders who would then pull their pants up and attempt to escape the noise and humiliation. […] Within 6 months, they shamed some 250 people from different villages. Besides the whistling and flag-marking, the children also march around villages, chanting slogans against open defecation (OD), sending a direct message to all villagers about the dirty old habit.

The children’s involvement in this direct action against OD is part of the Community-Led Total Sanitation (CLTS), “an integrated approach to achieving and sustaining open defecation free status.” The children know that their efforts help protect their own and their communities’ health, and adults include them in community decision-making.

[…] Designed by social development specialist Dr. Kamal Kar, CLTS was introduced by Plan, an international development agency, to some 200 villages in Dinajpur in 2004.

[…] In CLTS, hands-off facilitation is important. The rule of thumb for social development facilitators is to trigger self-realization, and not to lecture. Instant provision of hardware-latrines or toilets-are also discouraged. Villagers have to realize first that the problem is staring at them right in the face. The CLTS approach helps communities recognize that they need such sanitation facilities, that they should mobilize themselves to build their own toilets, and that everyone in the village should contribute to achieve “total sanitation.”

[…] Today, most Dinajpur villages have achieved “open defecation free” (ODF) status and, thanks to Plan’s efforts, a number of villages in several districts have also adopted the CLTS approach.

The children’s campaign is the just the beginning. CLTS allows villagers to generate their own ideas for improvement, take control of development processes and decision-making, and manage and sustain the activities. Often, CLTS has led to improving latrine designs, adopting hygienic practices, managing solid waste and wastewater, protecting drinking water sources, and other environmental activities.

Some villagers, however, can prove to be more difficult than others. Ferdousi said, “Two years to convert everyone is not enough, but we will keep on raising awareness.”

Plan now promotes CLTS in other countries in Asia, Africa, and the Middle East. A CLTS Handbook, published in 2008, is also available for social development facilitators.

A damning report has highlighted horrific shortfalls in the provision of water and sanitation and the failure to end violence against women and children in some of South Africa’s poorest provinces.

The report by the Presidential Working Group on Women (PWGW) comes as women and gender rights groups yesterday called for stronger political leadership in the fight to stop violence against women.

President Thabo Mbeki, who addressed the PWGW in Pretoria on Tuesday, has also come down hard – giving the group a four-week deadline to expand their organisation to see what is needed to be done to alleviate the plight of women and children.

Moa wharf is home to an estimated population of seven thousand people, many of them children. Many of these children are affected illness due to the poor sanitation of the community.

Many of the children of Moa wharf do not attend school, as they are too busy working as fisherman.

These young children, between the ages of nine and sixteen, consider fishing as a lucrative job for them to get money to support their family, as some are the sole bread winners of their families.

Life in Moa wharf, as in many Sierra Leonean slums, is difficult and unhealthy. Hundreds of thousands of people suffer in conditions too poor to sustain a healthy life.

(…) The report, “The State of Africa’s Children 2008,” was launched on May 28 at the Fourth Tokyo International Conference on African Development in Japan.

(…)  The facts are shocking. Although Africa accounts for only 22 percent of births globally, half of the 10 million child deaths annually occur on the continent. Africa is the only continent that has seen rising numbers of deaths among children under five since the 1970s.  Many of these children die of preventable and curable diseases. UNICEF’s report says malaria is the cause of 18 percent of under-five deaths in Africa. Diarrhoeal diseases and pneumonia — both illnesses that thrive in poor communities where sanitation is severely compromised, and where residents are often undernourished and exposed to pollution — account for a further 40 percent of child deaths. Another major killer is AIDS. (…)

More at UNICEF Newsline (including Press Release and the Report itself)