Building safe and sustainable sanitation systems is a huge challenge for many poor communities, but when homes are built over water a new dimension is added. James Wicken, WaterAid Country Representative for Cambodia, looks at a new solution to the problem faced by Cambodia’s floating villages.

A challenging environment for sanitation

For Cambodia to reach the Government’s target of universal access to sanitation by 2025, people living in these types of areas need sustainable solutions. In Cambodia, an estimated 25-45% of the population lives in ‘challenging environments’ such as floating villages. It is often the poorest people who can’t afford to own land who live in such places, and these populations are expected to grow, especially in cities as poor people continue to migrate. Cambodia is not alone – these informal settlements are found in many countries, such as Myanmar, Malaysia, Nigeria and Indonesia. 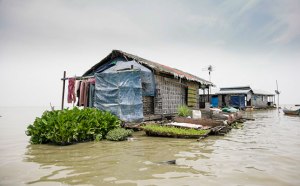 Because of WaterAid’s focus on equity and inclusion, these populations came on to our radar in our first year of work in Cambodia. WaterAid is partnering with a social enterprise calledWetlands Work! to test one potential solution – called the HandyPod – on the Tonlé Sap lake.

When people living in the lake’s floating villages – who number well over 100,000 – need to go to the toilet, they take a boat to a secluded spot on the lake, go into the surrounding forest, or at night may squat off the side of their floating house. This same water around the houses is used to wash dishes and clothes. Young children swim in it.

The HandyPod took Wetlands Work! years to design, test and redesign. Resembling a floating garden, or a child’s paddling pool with a garden in it, it contains a man-made wetland filled with water hyacinths.

In the system, a normal porcelain squat toilet on the back of a floating house connects to a drum where the anaerobic (oxygen-less) processes take place. From here, the waste passes through to the HandyPod floating nearby, where the roots of water hyacinths further break down the waste before it passes into the lake. Wetlands Work! regularly collects water samples in the area around the pods, to ensure the quality conforms to Cambodian standards.

The brief is part of the CLTS Learning Series, a collection of seven country case studies on CLTS implementation prepared by The Water Institute at the University of North Carolina at Chapel Hill as part of the Plan International USA project, Testing CLTS Approaches for Scalability. The 4-page brief is based on the 40-page Cambodia Country Report.

Funky Sink Gets Kids In Cambodia To Wash Up, Could Save Thousands Of Young Lives

Funky Sink Gets Kids In Cambodia To Wash Up, Could Save Thousands Of Young Lives | Source: Huffington Post, July 8 2015 |

Cambodia has the lowest access to sanitation in all of Southeast Asia, and as a result more than 10,000 children die every year due to diarrheal diseases, according to WaterAid.

To help curb those figures, nonprofit WaterSHED recently released the LaBobo, a portable and inexpensive sink whose colorful design encourages kids to improve their hygiene habits.

Background – Despite evidence that children’s faeces play a major role in diarrheal disease transmission through the contamination of the household environment, relatively little priority has been given to research and interventions in this area. In Cambodia, only 20% of children’s faeces were disposed of in an improved sanitation facility according to the 2010 Demographic and Health Survey. This study explores current practices and the role that enabling products may play in increasing hygienic management practices.

Methods – A household survey was conducted in 130 houses in 21 villages and two provinces in Cambodia. Four focus group discussions were conducted, two in each province. Households were restricted to those with an improved sanitation facility and at least one child under five. Results were analysed using STATA13 and explanatory variables were tested individually and using logistic regression to control for child age. Focus group results were analysed qualitatively.

Results – Main place of defecation, method of moving faeces, and main place of disposal differed depending on child age, with children under two least likely to have their faeces disposed of hygienically. Overall, 62.7% of households reported using a hygienic main disposal site while 35.7% reported doing so consistently. Factors associated with hygienic disposal included the number of years a household had owned a latrine, the age of the caregiver, the consistency of adult latrine use, and the presence of tools for child faeces management in the latrine.

Discussion – The results demonstrate a need for interventions targeting the hygienic management of faeces of children under five in Cambodia, and particularly for children under two. The technologies most likely to facilitate hygienic disposal for these age ranges include reusable diapers, potties, and potentially latrine seats. Design features should ensure child safety, time-savings, cost-savings, ease of disposal, and ease of cleaning. Product marketing will also need to address hygiene behaviours related to child cleaning and caretaker hand washing to ensure reduction of disease transmission.

WaterSHED has published the findings from its comprehensive review of rural consumer sanitation adoption in Cambodia. The study evaluates WaterSHED’s Hands-Off sanitation marketing program, which was designed to catalyze the market for improved sanitation in rural Cambodia by stimulating household demand and improving the supply of affordable sanitation options for rural households.

The study confirms that the WaterSHED program has resulted in a substantial acceleration in improved latrine coverage and usage in the study areas. Household consumers are now able to access an improved latrine more easily and more cheaply than before.

New distribution and sales mechanisms are increasing household awareness of and exposure to more affordable latrine products and increasing motivation to invest in an improved latrine.

Enterprises are demonstrating that they serve at least some segments of the previously unserved rural market.

Nonetheless, significant challenges still remain. The study reveals a number of opportunities to break down remaining barriers to uptake of improved latrines and to further evolve WaterSHED’s market-based approach.

Call for proposals: evaluation Sustainable Sanitation and Hygiene for All Programme in Cambodia

SNV regularly commissions evaluations of a selected group of its projects. In 2014-2015, SNV is commissioning two project evaluations in each of its three main sectors of work. These sectors are Agriculture, WASH and Renewable Energy. This request for proposals covers the evaluation of SNVs Sustainable Sanitation and Hygiene for All Programme in Cambodia.

In case you are interested in conducting this evaluation, please have a look at the Terms of Reference.

iDE congratulates the people of Cambodia in a new video:

The great progress in rural sanitation is something for Cambodia to be proud of.”
—Chreay Pom, Director, Department of Rural Health at Ministry of Rural Development

The rate at which sanitary toilets are being installed in rural Cambodia has increased dramatically since the Government of Cambodia made rural sanitation a priority in 2008. In the past six years, hundreds of thousands of rural families are experiencing the benefits of improved sanitation for the first time. This video celebrates Cambodia’s progress in sanitation and highlights the people who have made it possible—government officials, local business people and rural families.

“In 2008, the government set sanitation as a priority in order to improve people’s standard of living. Since then, we’ve noticed a huge change in rural communities. People have latrines at home and they understand what good sanitation is, and actually practice it within their families.” —Dr. Chea Samnang, WSSCC National Coordinator

Many national and international organizations have also contributed to the sanitation movement happening in Cambodia. One of these organizations is iDE. iDE is dedicated to outsmarting diarrheal disease by making sure that quality toilets are accessible through local markets at an affordable price.

“…We are helping the private sector learn what people want and helping them produce and sell it at an affordable price. The last few years have been a turning point across the country, with annual toilet sales increasing four-fold since 2008.” —iDE

iDE is an international non-profit organization dedicated to creating income and livelihood opportunities for the rural poor. In addition to worldwide programs in agriculture, iDE implements programs in Africa and Asia in the water, sanitation and hygiene (WASH) sector. iDE’s WASH programs focus on creating markets around aspirational and effective WASH products and services that reduce diarrheal disease among poor households. iDE has impacted more than 23 million people globally to date through its WASH and agriculture interventions.