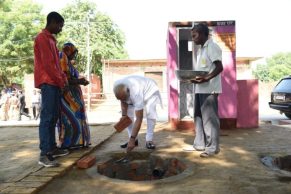 Narendra Modi participating in a construction of a twin toilet pit in Varanasi on 22 September.| Source: @NarendraModi

Study reveals health indicators for children, women have shown improvement in areas that have become open defecation-free under Swachh Bharat in the past year.

Even as questions are being raised over the Narendra Modi government’s track record of delivering on the Swachh Bharat mission, there is one report card where the PM’s pet project seems to be scoring well — the state of health report.

A study, undertaken by the Bill & Melinda Gates Foundation (BMGF) on behalf of the drinking water and sanitation ministry to assess the health impact of the Swachh mission in rural areas, reveals that health indicators for children and women have shown considerable improvement in areas that have become open defecation-free (ODF) in the past one year.

The study observes that “becoming ODF had a positive impact on child’s health and nutrition, evident from the fact that the health and nutritional indicators of the children and mothers belonging to the ODF areas were comparatively better than their non-ODF counterparts”.

Like Loading...
This entry was posted in Campaigns and Events, Progress on Sanitation, South Asia and tagged India, Swachh Bharat. Bookmark the permalink.