A defining moment for the future of wastewater?

A defining moment for the future of wastewater? IWA Source, June 2017.

As we mark the international year of Wastewater, I’m taken back to my childhood crossing the Adayar Bridge in Chennai, India, in an air-conditioned “Ambassador” (the iconic Indian car that served as high-end taxis in the 80s). The airtight car windows and cool air-conditioning provided little protection from the stench coming from the river, reduced to trickle passing under the bridge on its way to making a very undramatic entrance into the Bay of Bengal. 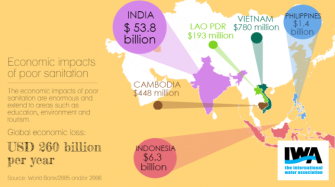 On that hot summer day as I sat in my “protected” Ambassador with my family, the Adayar river, once the economic and cultural backbone of Chennai, was reduced to nothing but an active landfill and untreated wastewater discharge zone. To complement the stench, the sight was unbearable, resembling a large septic tank of sludgy consistency filled with debris. Thankfully, the story of Adayar and its estuarine extension, the Coum river, does not end there.

Fast-forward to 2012, and a large, citizen-driven petition led by local NGO, the Consumer Action Group, successfully persuaded the Tamil Nadu government to take action. This has resulted in the development and implementation of a large-scale restoration programme that began with the construction of over 300 sewage treatment plants. This was followed by an eco-restoration phase, including the plantation of mangroves along the estuary stretch of the rivers. The programme is now in its third phase with continued eco-restoration and de-silting of the riverbeds.

This combination of nature based solutions and grey infrastructure has become a flagship project for Tamil Nadu, and serves as an eco-restoration model to be replicated in the rest of the southern Indian state. It’s also a timely reminder for the rest of the world, of what can be achieved when citizens and governments come together to press for change.