Over 940 million people globally have to defecate outside because they lack access to toilets. In a nomad camp in Pakistan, women tell of how relieving themselves behind bushes or in fields puts them at risk of health problems, harassment and sexual assault every day.

PESHAWAR, Pakistan – Nasreen Bibi, 27, is busy preparing lunch for her family outside their squalid tent. Ten years ago, poverty drove her and her husband to move their three children and a camel from Sheikhupura, Punjab, to Peshawar in Pakistan to look for work.

Since then, they have been living in a tent in a nomad camp in Khyber Pakhtunkhwa, selling camel’s milk on the roadside for $2.50 a day. Their makeshift home has no water, electricity or toilets. 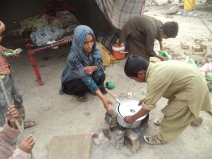 Nasreen Bibi prepares lunch outside her family’s tent in a nomad camp in Peshawar. They live with no running water, no electricity and no toilets, so when Bibi goes to defecate in the open, her husband or her son have to stand guard against harassers. Photo by Mahwish Qayyum

“To answer the call of nature, we have to go to nearby fields. Sometimes men try to [watch] us secretly when we defecate in the open,” Bibi says. “In order to ward off harassers, my husband or my son accompany me to the field and stand watch.”

Around 2.4 billion people – roughly one third of the world’s population – don’t have access to toilets, according to a 2015 report by UNICEF and WHO.

Among them are over 945 million people who, like Bibi and her family, are forced to defecate in the open.

And as these women suffer the indignity of having to defecate behind bushes or out in a field, every trip to the bathroom makes them vulnerable to harassment, sexual assault or even animal attack.

Like Loading...
This entry was posted in Dignity and Social Development and tagged gender based vioience. Bookmark the permalink.