Tiger worms: the ingenious solution to sanitation in refugee camps 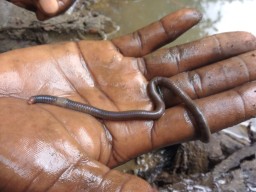 A team of British charity workers have come up with a simple, cheap and downright ingenious solution to the problem of providing safe sanitation to some of the world’s most crowded refugee camps – and it involves hundreds of bucketfuls of worms.

Engineers working for Oxfam have created what they have dubbed the “tiger toilet”: a no-frills latrine which uses composting worms to convert human waste into useful fertiliser.

The invention carries the added benefit of reducing the risk of disease.

The toilets, so named because of the striped tiger worms (Eisenia fetida) upon which they rely, were first trialled by a team working in Liberia in 2013.