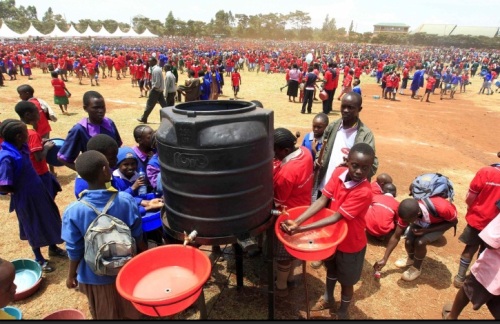 Close to 20,000 school children and adults took part in a handwashing campaign in an attempt to establish a new Guinness World Record. They gathered at Thirime Primary School in Kikuyu on 15 October 2010 to mark Global Handwashing Day.

Prof. Kiyiapi announced that every school in Kenya should have a clean toilet for boys and another for girls.

“The Ministry will ensure this happens and they must be properly designed and clean. Out of the money we give to schools, we are going to tell the head teachers to get some of it that was going into instructional materials to construct proper toilets where there are none to improve hygiene,” he said.

Students from over 20 schools in Kikuyu and Dagoretti areas in Kenya took part in Global Handwashing Day events.

Below is a report by Smriti Vidyarthi of NTV Kenya on the record breaking attempt at Thirime Primary School.